If you think the volcanoes, geysers, and waterfalls in Iceland are amazing, wait until you hear about the Christmas traditions of Icelanders! I admit I am not a big holiday-celebrating person; I stopped decorating once my son was out of the house which coincided with the start my Ph.D. program. But if I permanently lived in Iceland, I would follow the traditions which includes, hiking to the local forest where I would chop down my Christmas tree and don it with the 13 yule lads (the Santa substitutes), the evil Christmas cat, and their mother Grýla. After opening presents on Christmas Eve, I would then snuggle with a cozy blanket and stay up to the wee hours of the morning reading the new books I just received for Christmas while enjoying some novel treat served only at Christmas time. In Iceland, the Christmas season is a bright light during the harsh, dark winters of the northern latitudes where the sun rises and sets just beyond the horizon, only revealing itself for a few hours a day to make spectacular long, drawn out sunrises and sunsets. If the hustle and bustle is what you crave at Christmas time, you can find a multitude of stores vying for your money, thousands of Christmas shoppers, endless carols, and decorations in the capital city of Reykjavik. But where I lived in the less-populated north, Christmas is a time for snow, providing a spectacular landscape, northern lights, and a superfluous amount of Icelandic traditions.

The city view from across Lake Tjornin

If you look around the city, you can find the Yule Lads hanging around!

No Virginia, there is no Santa Claus.

There is no Santa Claus in Iceland! That doesn’t mean there are no presents, or even a tree for them to go under—children need incentive to be good. Instead, Icelanders rely on the 13 yule lads to promote good behavior. Unlike Santa Claus, a character of goodness and charm, the yule lads are mischievous old men descended from trolls and named for their bad, mischievous habits. They live in the lava field of Dimmiborgir located in north Iceland with their mother Grýla and her husband, Leppalúði. She is known to find naughty children and devour them after cooking them in her cauldron (yikes!). Then there is the family cat who is also known to eat children. It’s enough to make all children behave for the rest of their lives (which may contribute to Iceland being one of the safest countries in the world)! Grýla is known as a strict parent and only lets her children (grown men who look as old as Santa) leave the house one at a time beginning 13 days before Christmas in search of their favorite treats from the families of Iceland.

Grýla and her cauldron — passerby’s are invited to jump in!

Beginning on Dec. 12, the first-born lad, Sheep Warrior, leads the trail (literally from the mountains) to the towns in search of their treats including cheese, milk, cookies and Iceland’s famous Skyr (a yogurt of sorts). Next is Gully Gawk who is in charge of the mischievous Christmas cat, followed by Stubby, Spoon Licker, Pot Licker, Bowl Licker, Door Slammer, Skyr Glutton, Sausage Stealer, Window Peeper (creepy), Door Sniffer, Meat Hook, and Candle Beggar. Each yule lad sticks around for 13 days with the last leaving on twelfth night (January 6). On Christmas eve, children around Iceland must place a shoe in their window – good children receive a gift from the lads while the naughty children receive a potato. You may catch a glimpse of the yule lads if you visit Dimmiborgir, located in the Lake Mývatn region in north Iceland. You can also catch Dimmiborgir in the 4th season of Game of Thrones, as it was the wildling camp!

Dimmiborgir was the backdrop of the wildling camp on Game of Thrones. 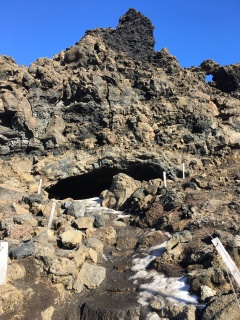 Hidden caves are said to be the homes of the Yule Lads.

The lava formations of Dimmiborgir.

A few weeks ago, I returned to Hólar University College where I conducted my research in Iceland during the last year. I sat down with Erla Björk Örnólfsdóttir, Hólar University College’s president and Bjarni Kristjánsson, department head at Hólar’s Aquaculture and Fish Biology department to learn about their Icelandic traditions and if the rumor was true that Icelanders stay up all night reading books on Christmas. So, during our Friday night beer club, I asked my questions and got insight into the lives of two people whom I have come to call my friends. They shared their fond childhood memories and reflected on how Christmas has changed in respect to today’s technological world.

December 23rd (Þorláksmessa) is the day before Christmas–a time to do your final shopping, stroll down the wintery, lighted streets of your local downtown, while sipping hot chocolate with carols like “Dansaðu vindur” and “Jól, jól skínandi skær” in the background and then returning home to finish any last-minute decorations. December 24th is about family and preparation for the evening festivities. Some may visit family, some make almond rice pudding (möndlugrautur), which is itself a gift-giving activity—the pudding has only one almond inside and the lucky winner gets a gift for their find. Christmas begins promptly at 6:00 p.m. on December 24 (known as Aðfangadagur) with a large family dinner that could include the traditional smoked lamb (hangikjöt), boiled potatoes with white sauce (like a sweetened cream gravy), and homemade ice cream. The grown-ups often have after-dinner coffee and then the the reading of all the Christmas cards commences before opening presents. According to Bjarni, the anticipation of waiting for the presents was excruciating as parents made an evening coffee and read, line by line, the Christmas cards! Finally, time to open gifts! But alas, it is not a free for all—everyone takes turns opening their gifts one at a time, showing what they have received. According to Bjarni and Erla, children often received 6-8 gifts, 2-3 from parents, some from other family members and at least one from the yule lads. Gifts such as apples and mandarins were a rarity in Iceland in the 1970s and 80s, and so they were considered treasures by children. Christmas was also a rare occasion to have homemade treats such as ice cream, also not readily available. But today, you can find these rarities in every supermarket in Iceland. Therefore, today’s kids are no longer impressed with receiving exotic fruity or homemade ice cream. While today the number and types of gifts have changed, it is apparent that the spirit of family and tradition have not.

But gifts aside, I got the feeling that the Christmas season is a very special time of year for Icelanders. Erla, reflecting on the holidays said it best, “without the holiday festivities, this time of year would be a boring, dark and dull period because it is the darkest time of year for Icelanders”. She was referring to the few hours of light during the day in the northern latitudes during winter. In fact, in the Hjaltadalur valley where Hólar is located, the sun never shines on the valley due to the large mountains that surround the valley. So, what do Icelanders do during these dark times? Well, they read a lot! Most Icelanders receive several books at Christmas time. I had heard that many Icelanders read on Christmas night and so I asked both Erla and Bjarni if this was true–and it is! Beginning in November, publishers begin printing 1000’s of books for the holiday season known as Jólabókaflóð (Christmas book flood). In 2014, the holiday season saw a flood of 1,400 new titles being printed. In fact, Iceland once held the title for the most book titles printed per capita and only recently did Britain surpass their long-standing record. This is fascinating because Iceland with its 330,000 residents, has a land area the size of Kentucky with 1/12 the population. Our discussion led to some hypotheses about why books became a big deal in Iceland and how the tradition of reading to the wee hours of the morning started. Before modern conveniences, candles used to be a traditional gift for Icelanders, probably stemming from the dark winters—a candle would be a welcomed gift. Without modern conveniences, in the 18th and 19th centuries, reading became a popular pastime with the advent of books. This may have resulted in the relatively high rate of literacy and perhaps why Iceland has so many authors. I can tell you that the beauty of Iceland in all its grandeur is enough to want to make someone put it down on paper and describe the unique landscape.

I am unsure of when I will return to Iceland, but I am currently writing proposals to be able to continue my research there. While I can certainly stay up to the wee hours of the morning reading books here in Oklahoma, where I currently live, I’d rather be in the quaint valley of Hjaltadalur, surrounded by snow-covered table top mountains against the backdrop of the northern lights.

Wintertime in the Hjaltadalur valley.

4 thoughts on “It’s a wonderful life in Iceland” 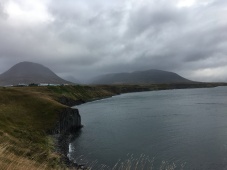